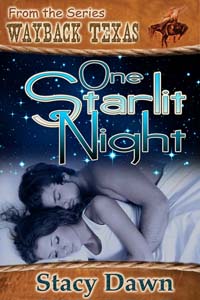 
When Elizabeth O'Leary meets up with the cowboy she's been avoiding for over two years, she doesn't know whether to trust her heart or her head. One tells her Grey Wulfsen just might be The One, the other tells her it doesn’t matter because he'll never forgive her when he finds out what she took away with her on that one starlit night.

I just felt so involved with this story. I felt like I was watching a movie, the details, descriptions and facts were so vivid and real. And ladies…and some men…who doesn’t love a cowboy? If you do, than this is an anthology you must check out.http://mistressbellareviews.blogspot.com/2009/07/finding-their-way-back-wayback-texas.html?zx=4b2a9528d6747e68


Stacy Dawn really pulls at the reader's heartstrings with One Starlit Night. Elizabeth and Grey seem to be perfect for each other but fear, misunderstanding and misconceptions could potentially destroy any hope they have for a future together. Ms. Dawn does a brilliant job of bringing her characters to life so that they feel like long lost friends.


“Grey!” The name tore from her lips involuntarily and she clasped a hand over her mouth to silence the terrified screams clogging her throat.

Painfully still moments coursed by before she saw the gloved hands brace themselves in the dirt and a dusty blond head raise.

Still crouched on the ground over her folder, she was in perfect alignment for eyes the color of buffed steel to lock onto hers.

Oh, God. This was exactly what she had wished for—and prayed to avoid. The ever logical side of her argued that the recognition tilting the corner of those sculptured lips up was just her imagination. The bold woman she’d locked up deep inside over the past two years said otherwise. He knows, he remembers.

Forcing herself to break the eye contact, Elizabeth shook her head and clasped onto logic like a rock wall. Being pragmatic had never let her down before, and even, in a roundabout way, it had worked out that one weak moment, too. Hadn’t she gotten what she wanted? At least for the most part.
Posted by Stacy Dawn at 8:47 AM