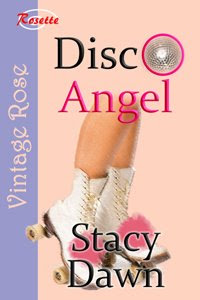 Bobby Hues has his eye on the Disco Angel jiving around Electric Nights Roller Disco. But what would Miss Spring Break 1976 and the foxiest chick he'd ever laid eyes on want with a lowly grease monkey like himself?

Summer Benton's heart started racing the minute she rolled her broken down ride into Bobby's garage. When he gets a gig working at her favorite hang out, she thinks she has it made—but the quiet hunk still isn't talking. A little push on her part starts the wheels rolling—in the wrong direction. Now she has to figure out how to lose the wrong guy, and convince the right one she digs him enough to be his Disco Angel, forever.

Do you miss the seventies? Step back in time with Stacy Dawn and relive the days of disco, mirrored balls, Afros, and cheese weasels. Ms. Dawn captures the feeling of the times with a cute story of two individuals who have a hard time getting together. Take a few minutes, get back to disco fever with Summer and Bobby, and find out how a soft-spoken man can finally tell the girl of his dreams how he feels.
~Reviewed by Judy Thomas, The Long and The Short of It

"Don't give me none of that crap. You been hangin' on her ever since she brought her ride into your old man's garage." Marty slapped Bobby on the shoulder before returning to the popcorn machine. "Don't think I don't know the reason you wanted me to get you this weekend gig."
Bobby turned from the waft of thick, melted butter to stab a scoop into the ice box. "I needed the extra bread."

Waiting for the soda machine to fill the cup, his gaze flipped up again and tagged along with the angel on wheels as she rounded the closest bend.

Summer Benton was happenin' all right.

Her whole body swayed in perfect time to the music like some heavenly being. Colored lights bounced from muralled walls to dance a rainbow over shiny, feathered hair wisping out behind her. A delicate hand smoothed the long bangs from her face, giving him a good view of round green eyes. The mirrored disco ball above made them sparkle when they were open. But, he often saw her painted lashes flutter shut like now. Chin held up to the breeze created by her speed driven wheels, Summer's soft features held such a look of bliss, he wondered what she pictured in that pretty little head of hers.

"Pipe down already," Bobby grumbled. With a reluctant last look, he pulled his gaze away from Disco Angel to take the next order.

She was way out of his league anyway. What would a college senior and last year's Miss Spring Break 1976—not to mention the finest damn girl he'd ever laid eyes on—want with a grease monkey piece of nothin' like his father always called him.

Marty butted his shoulder. "If you're gonna make your move, you better do it soon before she flies off with the next cat that—uh, oh, too late."

Available at The Wild Rose Press
Posted by Stacy Dawn at 2:53 PM