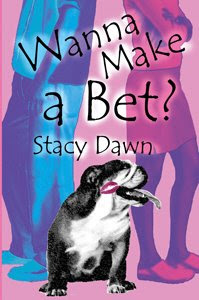 Wanna make a bet?
When aspiring artist and purposefully single Sophie Montgomery mutters those four fateful words, her sexy neighbor, Jay Coltrane, pounces on the opportunity to prove she's not as immune to him as she thinks. Before she knows it, Sophie finds herself not only betting against a seduction, she's betting against her own ability to keep her dreams intact and a certain luscious landscaper out of them.

Sophie and Jay have problems and baggage to settle along the way which only makes this a more believable story with the ups and downs of the inner battles that they both have going on. This was a realistic, delightful read, with the added romance of Julia and Dan which only strengthened the story. I would give this a book rating of five, and urge you to go to Wild Rose Press and give this book a read.
~Review from Books, Bitching,and Banter


Lay down your money and let the dice roll, because Wanna Make a Bet is a sure thing. From a drool-worthy hero to an adorable bulldog with a thing for monkeys, this book will hook you in with its depth of characters, humor, and sizzling sensuality. I cancelled dinners and was late for appointments, all because I had to know whether it would be Jay or Sophie who won the bet. Stacy Dawn is a talent and I can't wait for her next novel!
~Bronwyn Storm, author

"Stacy Dawn, a master of short stories, has expanded her talent to create a sexier-than-sin hero and a sassy heroine in Wanna Make A Bet?. I was captivated from the first page, drawn into the roller-coaster ride of Jay and Sophie's romance, breathless from the first touch of Jay's hand. This story is guaranteed to put a smile on your face and in your heart."
~Johanna Riley, author

With all of Jay's friends getting married, he stands to win a sizeable bet that was made when they were all in college together since he will be the only single person left. Sophie is the sexy tenant of Jay's who babysits his bulldog, Harvey for him during the day. She is adamant that she is immune to Jay, who is a sexy playboy in her eyes. Jay jumps on a chance to show Sophie that she is not as immune to him as she thinks so in front of his friends the words "wanna make a bet" were uttered and she was not going to back down. Soon though she finds the folly of those words. What you have is a delightful read where emotions run high. I loved the book from start to finish, and would recommend it to anyone.
~Cryna Palmiere

Entering the small hallway connecting their two apartments, Sophie made a strategic mistake. She looked at Jay. The blue depths of his eyes instantly deepened to a rich sapphire.

She backed up the two steps to her door, turned and fidgeted with the lock. Sophie desperately wanted to go right in, more to the truth, run right in and hide. Unfortunately, ingrained manners forced her to turn before entering.

Jay stood close behind her, his moon-enhanced cologne teasing her senses. With a single breath, the temperature rose by degrees.

"Yes, well, I had a great time. Thank you." Sophie hated how her lip trembled when she offered him a smile.

The first two kisses came as a surprise. This one she saw coming a mile away yet the hand she held to block his way seemed to be the only part of her body currently connected to her brain. Every other part leaned forward wanting to bury themselves deep within him. Her lips practically screamed to be touched by his.

The pressure of his chest beneath her hand inched it back towards her. It took Herculean effort to hold him at bay and wrap a cloak of indifference around her. Sophie prayed her knees would stay strong long enough to finish this.

"You didn't think it would be that easy now did you, Slick? You're good—I'll give you that. But I have plans for my winnings." She forced an extra emphasis on the word my.

"Stella?" Jay guffawed, not a little in surprise. "You'd pick a car over a nice warm body like mine?" He sighed dejectedly, humor lighting his handsome face.

"I'm not looking for any warm body right now." She held up a finger in anticipation of his protest.

"And I don't ever plan to be someone's girl d'jouer. Not even for a little fun."

For half a second, Sophie could've sworn his smiled faltered then it was back brighter than ever.

"How about a simple good-night kiss then. Between friends." He spoke to her lips as if he knew they wanted it bad.

Sophie took a deep breath, let it out slowly, and grinned. "Sure." She eyed the stout bulldog waiting patiently at their feet. "Go ahead, Harvey. Give him a kiss."

Obediently, the bulldog stuck his tongue out in a drool-fest pant. Sophie stole the moment of Jay's distraction to slip inside and close the door.

Wooshing out a lung-full of air, she leaned back on the door. That was way too close.

Jay's muffled, "Spoil sport," sifted through the door on a rich, deep chuckle. Beatrice's earlier question suddenly popped into her head. Who's winning?